Hvat* never wanted to live this day but in her mind, she has relived this day thousands of times. Waking in the darkness, hearing the sounds of exploding missiles, screams piercing the moment, and now, seeing the blood, too much blood. 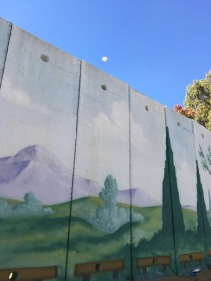 Hvat* lives in Israel in a small village near the Gaza strip, raising a small family, “This is my home, I don’t want to move, I want to live here, this is my land and this is my people.”  She had mentioned that to leave would to give the terrorists a win,

Standing there with her, within two minutes of the Gaza Strip border, less than ½ mile, the air was tense. The sky was clear, the air was dry and two elementary aged boys were riding their bikes. It was an uneasy feeling. Just a few days before our arrival IDF (Israeli Defense Forces) found a tunnel laden with explosives, motorcycles and several Hamas terrorists.

“No one ever forgets, it never goes away.”

Hurt feelings turned to compassion, many of the people in Palestine and Gaza are victims of Hamas terrorism just as we are. Her eyes are full of fear, her voice quivering, “I just want this to stop, for all of it to go away.”

It was a warm day, just like many days in the Southwestern part of the country of Israel. Just a few short miles to Egypt’s burning sands. The school was in session, concrete barriers were in place to help deter the attack of missiles. A weather balloon with a heat sensing camera monitors the area without much consolation.

Each bomb shelter received the artistic paint providing a stark contrast of fear with a mixture of hope.

Children have been trained and retrained, so much it has become a habit for most.

Children have learned to run for the bomb shelter. Hvat* looks out the window for a moment, “You may have 6 seconds to respond, twelve seconds would be considered a blessing. When the siren blows – you run. Several had an app on their phone telling them, not the weather or the news but the alert code. “You decide what pair of shoes to wear based on the intensity of the alert – if it is a high alert you wear something you can run in.” Tearfully she continues, “We painted the bomb shelters because we wanted to make this a better place.”shelters because we wanted to make this a better place.”

The paintings and the bomb shelters seemed to divide the consciousness, one of joy, the way life was meant to be and the other of desperation and fear. “You never know the next time terrorists may send a missile over, we are just two minutes away from the border. You really don’t have much time to get to the bomb shelter.” She tried to smile for the picture but it was brief.

Two children playing in the living room under a makeshift tent, their mother was too far from her children at the moment, unable to grab the children and run to safety in the 6-second warning. The missile hit in the nearby street, digging a crater hole, shrapnel flying through the air went through the wall of the house, striking the four-year-old boy. “When I got there he was covered in blood – her son was dead.”

Grieving mothers confess when you have multiple children you have to quietly and sincerely decide which child you will grab when the bomb siren goes off.

Michael’s* name is written as a memorable among a gripping list of others, upon the walls of concrete.

She softly cries again and those with us cried with her.

The hole in the wall of the house has been patched and the street repaired. The hot sun has faded the paint on each bomb shelter but the memories are as fresh as today.

Hvat* motioned with her hand, a gesture of despair, “Has anyone heard this story? Does anyone care?”

Yes, we have heard and yes, we care!

Have you hugged your child today?

*This is a true story but the names were changed for security reasons and personal privacy.

Copyright by Jim Laudell. Materials may not be copied, reproduced or distributed without the written permission of the author. You may share on Facebook, Twitter, and other forms of social media while giving credit to the author. This post should not be construed as medical, legal, counseling or professional advice.